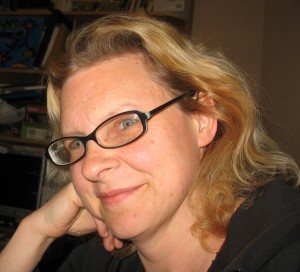 Liz John is a playwright based near Birmingham.  She writes for BBC Radio 4, The Archers, and she’s written extensively for BBC TV Doctors.

Liz’s BOLDtext work at The REP includes  The Offer for Fake Times;  Maslow – the Upgrade for Insatiable about the politics of consumption; and Escape for Behind Bars at Birmingham Rep about prison reform.  Her microplay Cogs & Co about Brexit, was part of Eurotrashed (May 2016).  One reviewer said: “My favourite piece was Liz John’s Cogs and Co which employed the cleverly sustained metaphor of a family firm with its bickering alliances and betrayals to remind us that politics, even when it’s the EU, is about people too.”

Liz is currently putting the finishing touches to her play about young activists and climate change: an extract of  World War 3 was very well received at its showcase in The Door.

Liz co-wrote a madcap interactive comedy, Calling for Help!, set in a call centre, which toured in 2016 attracting 4 star reviews.  Co-written with Julia Wright, the play was produced by Next Page Productions and funded by Arts Council England.  It was the second show from this creative team: Liz & Julia’s comedy Invisible toured in 2013 to lovely reviews.

Liz’s WW1 short, Perversion of Science, was part of Home Fires Burning at the Mockingbird Theatre in Nov 2015, for which she earned excellent reviews: “Liz John’s Perversion of Science shone out as a masterpiece of compression whose overshadowing backstory loomed to monstrous proportions.”  Life Goes On was part of Extreme at Birmingham Fest (July 2015), while Liz’s collaborative two-parter in BOLDtext’s Sunstroke (The Rep, Sept 2015), was written in partnership with Helen Kelly.

Previous work includes Papering Over (Pentabus national tour),  Second-hand Dreams at the Stephen Joseph Theatre in Scarborough, and Whorestown at the Hexagon, mac, as well as many short plays at Midlands theatres.

Liz joined The Archers writing team in 2017.   Her collaborative afternoon play, The Angel of New Street, was broadcast on Radio 4.  Co-written with Helen Kelly and Carolyn Scott-Jeffs, this was an impressionistic piece set and recorded in New Street Station, and directed by Peter Leslie Wild.

One thought on “Liz John”