Our new show ‘Behind Bars: Ghosts of the Lock-Up’ runs from the 19th-21st October for nine performances only.  Taking a theatrical journey through Birmingham’s Steelhouse Lane Lock-Up, it will raise spirits from the prison’s past. Stephen Jackson writes about one of them…

No high heels, no short skirts – that’s the advice for anyone coming to our next show. Why? Because it takes place in a jail and our audience will have to negotiate the walkways and spiral staircases of Birmingham’s Steelhouse Lane Lock-Up – three floors of echoing prison cells and clanging doors.

It’s a fantastic venue for a theatrical experience. Its shadows are full of ghosts. Incredibly, this nineteenth-century prison was in use until just recently, but we have gone back a hundred years to look at some of its legendary prisoners and staff.

When I saw the list of characters, there was only one I wanted to write about: Thomas Larvin – one of the Lock-Up’s craziest inmates. Arrested countless times for drunkenness, he became best known by his nickname Tommy Tank – a reference to his enormous capacity for drink. 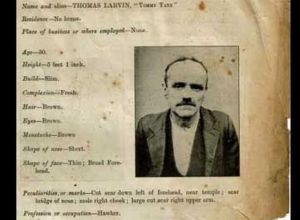 A fishmonger and street hawker, Tommy was also a joker and a prankster who would do anything for a bet – especially if booze was involved. Apparently he once walked backwards from Deritend to Stonebridge with a brick on his head to win a bet for copious amounts of ale.

On other occasions he was known to bite the heads off rats to earn himself a drink. Tommy was a colourful character around town. Unfortunately, his drinking led to skirmishes with pub landlords, broken windows and overnight stays in the Lock-Up before his frequent appearances in court the next morning.

If you’d like to meet Tommy and other ghosts of the Lock-Up, remember not to wear your high heels. It should be a great show in a great venue. It would be a crime to miss it.