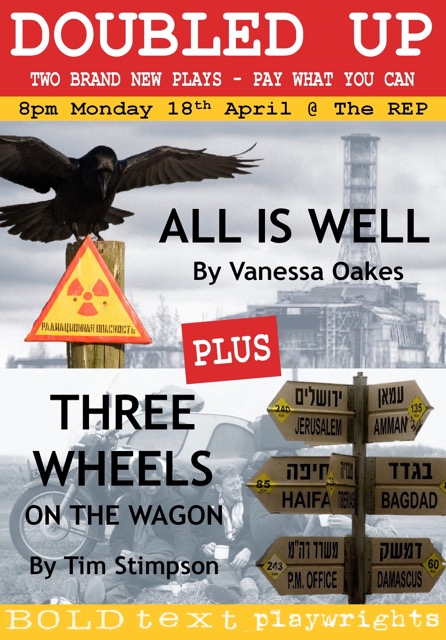 We are presenting two new plays exploring historical world events that continue to resonate with our concerns today. Their effects reach out from the past via terrorism, globalisation, human exodus and even on the radioactive dust covered wings of our migrating birds.

Three Wheels On The Wagon by Tim Stimpson
Adapted from the memoir by Tony Fisher. Music by Jonathan Girling.

Three young lads from Birmingham set out to travel to the Middle East – not to fight, but to see Jerusalem. Set in 1966, this true story paints an idiosyncratic and affectionate picture of a time when the Iron Curtain still divided Europe, when Arab nationalism trumped religious fundamentalism and only a few months before the Six Day War changed our world forever.

All Is Well by Vanessa Oakes

Thirty years ago on April 26th 1986 an accident happened at Chernobyl. ‘All Is Well’ is a response to the human cost of the Chernobyl nuclear disaster and asks, ‘is it possible for any of us to trust one another again?’

Tickets are FREE to book then if you like what you see PAY WHAT YOU CAN on the night #NOMONEYNOPROBLEM Tickets are available via www.birmingham-rep.co.uk/opendoor2016 or 0121 236 4455